My son, Eli, and his friends took up fishing a few years back. He has an awesome fishing rod, but he has since retired it. He has replaced fishing for varsity football, work (yes, he works – in a restaurant), and girls. He is 16 1/2 after all! Although he has given up the sport, his friends haven’t. And every time his friend Owen catches something wonderful, he calls me up and asks if he and I can cook together.

This past summer he caught massive amounts of blue fin tuna. I became the lucky recipient of pounds of tuna and when he called, I knew exactly what I wanted to make. Tuna Tartare! Most of the ingredients can be found in the pantry, all that was missing was the fish. I made the ginger oil before he arrived, but waited to chop, cut, and assemble the rest of the ingredients until he arrived.

Upon assembly, I realized that I didn’t have any won ton skins on hand (not really one of my pantry staples), so I sent the teenagers to the market. They couldn’t find the won ton skins(never thought to call and ask…boys), but they managed to bring home 2 pints of ice cream and some other crap, that I NEVER buy and is way too disgusting to mention. I improvised with some tortilla chips. I ate it sans the chips and when the tartare disappeared, they asked for more. With a fridge full of freshly caught blue fin tuna, I couldn’t refuse.

• chop tuna into small chunks and place in the fridge.
• make ginger oil: combine lots of ginger peel and about a 1 cup of sunflower oil in a heavy duty saucepan. heat oil over medium heat, about 5 minutes. let steep for a few hours. let cool, strain, and store in a glass jar.
• in a large, glass bowl, combine the scallions, cucumbers, celery, salt, and pepper.
• in another bowl, combine the tamari, rice wine vinegar, ginger, garlic, ginger oil, and Sriracha. whisk to combine.
• toss tuna, vegetable mixture, and dressing to combine. add avocado and sesame seeds. season to taste.
• serve on fried won ton skins, tortilla chips, or eat right out of the bowl.*original recipe can be found here

This week I am serving up: 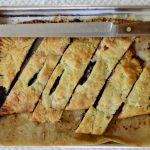 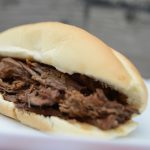