Failure can sometimes be okay. With my most recent experience with failure, a failed batch of gluten free graham crackers did not go to waste. Actually, in my house, very little goes to waste and a bad, test batch of cookies is no exception.

After mixing the dough, it resembled a batter like consistancy rather than a “dough”. I knew I wasn’t going to be able to roll it out, so instead I baked off a batch, simply to test. They came out more like a cookie rather than what, in my head I wanted them to be; flat. Eli, of course, loved them. He couldn’t stop eating them. But I was malcontent and needed to turn my negative into a positive.

So, I pulverized the cookies in the Cuisinart. Such a great feeling!  Stored half in the freezer. The other half needed a home; a home that took days to create. I made s’mores parfaits. Although Eli loved the whole idea, it wasn’t “pretty”. Next, I made some chocolate ganache and created a few of these tarts. As always, they were winners. But I still wanted more.

With the addition of a big batch of Carrie’s marshmallows, I altered an old favorite; the s’mores cookie bar. Finally, I was satisfied. I have made something similar to this in the past, yet the original recipe called for a pre-packaged cookie dough mix and marshmallow fluff. I altered an old favorite using marshmallows made with honey rather than corn syrup and created my own gluten free graham cracker cookie dough mix. Due to the nature of these marshmallows being whole and pure, they melted into the cookie dough giving the texture an almost brittle like feel and taste. No one complained.

Isaac’s culmination theme this year was PERSERVERENCE. I feel I accomplished that. And in doing so, I have lots more ideas on the horizon for the remainder of these cookie crumbs.

• preheat oven to 350*
• butter an 8″ square baking pan(I love these). line with parchment and butter the paper.
• in a small saucepan, melt the butter.
• while the butter is melting, whisk the gluten free flour mix, graham cracker crumbs, xanthum gum, guar gum, baking powder, and salt. set aside.
• in large bowl, using a rubber spatula,combine the dark brown sugar, coconut sugar, and butter.
• add the egg and vanilla and mix to incorporate.
• mix in the dry ingredients.
• using a little less than half of the cookie dough, spread it evenly in the prepared pan (I used the palm of my hand to spread). make sure you get it into each corner.
• layer with chocolate chunks.
• cover chocolate with marshmallows. using your hands, press into cookie dough.
• using the remainder of your cookie dough mix, completely cover the chocolate and marshmallow chunks.
• bake 25-30 minutes until the top is golden and a toothpick inserted into the center comes out with just a few cookie crumbs attached.
• cool completely on a wire rack.
• place in fridge for about 45 minutes to set. cut into 16 2″ squares.
• can be stored in an airtight container for 3 days.

More S’mores Treats around the Web: 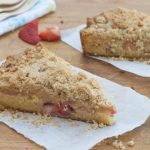 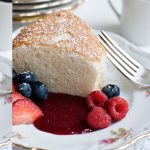