Lindsay and I met through our friend, Suze around 1996. She was fresh out of the Graphic Design program at U.C.L.A. and my brand, Little Folk Art, needed her. She and I immediately clicked and we have been creating together ever since. Not only have we continued to build our own brands, but other’s as well, but we also work together in an e-commerce, virtual based skin care business. Needless to say, our brains are always on fire and knowing her has been one of the biggest highlights in my adult, creative life.

Lindsay grew up in the Palisades and is the youngest of 14 children! Yup…you heard it right. And no, they were not religious. According to her mother, they were “lucky”.  When she asked her dad why they never used birth control, he replied, “Well that would have been unlucky.”

She was a Language Studies major at UC Santa Cruz, with an emphasis on French and Italian. She dreamed of working for the UN and traveling the world as an interpreter and her goal was to pick up new languages along the way. In her 20’s, she did end up traveling the world, but as fashion model. After globe trotting, she wanted to lay down some roots and it was then that she went back to school and launched her company, Lindsay Albert Design.

Lindsay uses her design studio as a blend of language and art and is, in her very own and unique way, fulfilling her dream of being an interpreter. But instead of using verbal language she is using her artistic and visual side to be a creative interpreter.

Her husband and her two amazingly talented and artistic daughters are her anchors for inspiration and all four of them spend their time creating with purpose and meaning.

I am blessed to have not only her, but also her entire unit of 4, in my life.

What is your greatest weakness?

What living person do you most admire?

What’s always in your bag/purse?

Lipstick and a bunch of receipts that I eventually toss or lose.

What is your “Uniform”?

I don’t have one! My closet is a wild mishmash of prints, patterns and styles! But I do work mostly from home and am guilty of quite often swapping PJs for sweatpants and hanging out in those all day 🙂

Who is your favorite hero in fiction?

Pippi Longstocking! She is strong, adventurous, obnoxious, unafraid, loves animals and helping others.

What is on the top of your bucket list?

To build a tiny home on our property, rent out our now too-big home, and hit the road, Jack!

Always more than I can get to but currently: Educated by Tara Westover 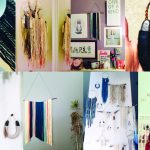 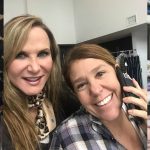