Tonight is the first night of Hannukah. For me, Hannukah is the time to bring family and friends together, create traditional food (mostly my grandma’s recipes), and read stories about why we light the menorah for eight nights. I have always loved Hannukah. As a little girl, it was all about the potato latkes, applesauce, and of course, presents. My best memories are those spent with my cousins, playing games we made up, and simply feeling safe within the confines of my close-nit family.

Applesauce was always something that came out of a jar. Although my grandma made EVERYTHING homemade, applesauce was not one of them. Until yesterday, I had never made applesauce. Not sure why. A one pot dish is something I adore and gravitate to, and applesauce is just that. Throw it all in your dutch oven, mix it up and put it in the oven for an hour and half and kind of forget about it(I did stir it once or twice). I was amazed at how something so simple could taste so complex. I have never been one to eat applesauce for the heck of it. Never been one until now. This morning I put a dollop on my oatmeal and in the afternoon I snuck a spoonful, just because.

Every year, since Eli was about 3, I have always volunteered to make latkes in his class. All through elementary school, there I was, schlepping into school with my Cuisinart, ingredients, oil, electric fry pan and a host of other utensils. Twelve years later, I am still making latkes, yet now cooking them up in Levi’s class. Last year, they were such a huge success in his kindergarten class, that just this past week, I received 4 emails requesting my recipe. For the first time (in 12 years), homemade applesauce will accompany my Cuisinart and the host of other characters needed to create this special holiday treat. Next year, I anticipate Levi’s class mates not only requesting my latke recipe, but this applesauce recipe as well.

Whatever your faith, I wish you lots of light and joy in your life this holiday season.

• preheat oven to 350*.
• peel, core, and cube apples. place in dutch oven.
• add the rest of the ingredients and toss to coat.
• cover pot and bake for about 1 1/2 hours or until apples are soft. stir every 30 minutes.
• remove from oven and whisk until all the apples have broken up and the consistency resembles applesauce.
• cool to room temperature and store in glass containers in the fridge. 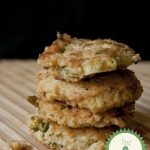 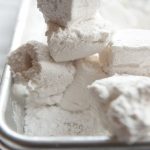 Lots of Holiday Cooking + A Cookware ReviewHoliday, The Urban Baker