Summer berries – is there really anything better? Ever since I can remember, cherries have been my berry of choice. I love them. I love them so much that not only do I buy big bags every time I visit the farmer’s market (which is 1-2 times per week), but I covet them. I am like a squirrel, literally, storing them up for the winter.

I think you all know by know how much I love my freezer. At the moment it’s full. Full of all the regular cast of characters and an overabundance of berries and stone fruit; blueberries, raspberries, blackberries, cherries (pounds of them), peaches, nectarines, and plums (the bananas are used for smoothies).

Fruit flash freezes beautifully. And because they are frozen at their freshest point, they can last for months in the freezer.

In addition to my overflowing freezer, my friend Jeni, dropped off about 5 pounds of cherries last week. She was leaving town and like me, hates wasting anything. Jeni knew if anyone could find a use for them it would be me. While she was enjoying her vacay in New Hampshire, I promised to make something she could bake off for those back to school, rushed mornings.

I am not partial to pie, but a cherry pie I rarely refuse. Now, a cherry pie is not a great choice for breakfast, but a handpie is. Using the dough from my Rustic Apple Galette as my starting point, I went to work.

While constructing them, I was a bit worried. Like the galette dough, it was sticky. I wasn’t sure it was going to keep it’s form and feared it would spread and instead of having cherry hand pies I would end up with cherry crumb pies. I was wrong.

So glad I was. Eli, my best taste tester, gave them a two thumbs up. His only complaint was that I didn’t make enough. With a dozen resting in my freezer for Jeni’s return, it takes all of my will power to not bake of one (or two) for a late afternoon snack.

• prepare pastry dough according to directions in Rustic Apple Galette recipe.
• in a small bowl, combine the arrowroot with 1 1/2 tablespoons water. mix until all the arrowroot is dissolved and the mixture resembles a runny paste.
• in a small sauce pan, combine the cherries, dried cherries, maple sugar, vanilla bean paste, and Celtic sea salt.
• cook over medium heat until the sugar dissolves and the cherries start to release their juices and the mixture has thickened. stir often. remove from heat and let cool to room temperature (it will be very thick, almost like jelly).
• while the cherry filling is cooling, roll out your pastry dough (be generous with your gluten free flour for rolling – it’s a very sticky dough).
• using a 4″ – 5″ round, cookie cutter, cut out circles and place on a parchment lined jelly roll pan. when all the dough has been cut, place pan in the freezer for 15 minutes.
• preheat oven to 375*
• fill each circle with about a tablespoon of filling.
• using your finger, dip it into a bowl of cold water and run your finger around the rim of the circle.
• fold the dough over the filling and press, gently, together so each side sticks.
• crimp the edges with a fork.
• using a sharp knife, cut two small slits on the top of each hand pie.
• combine egg white with 1 tablespoon of water and mix well.
• brush each hand pie with egg wash. sprinkle top with maple sugar. place on a parchment lined baking sheet.
• bake for 25 – 35 minutes or until the edges start to turn a golden brown and the cherries are slightly bubbling through the slits on the top of the pastry.
• let cool before eating.
• FYI – so good with a scoop of ice cream on top! 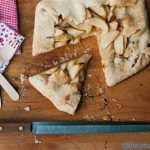 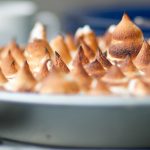