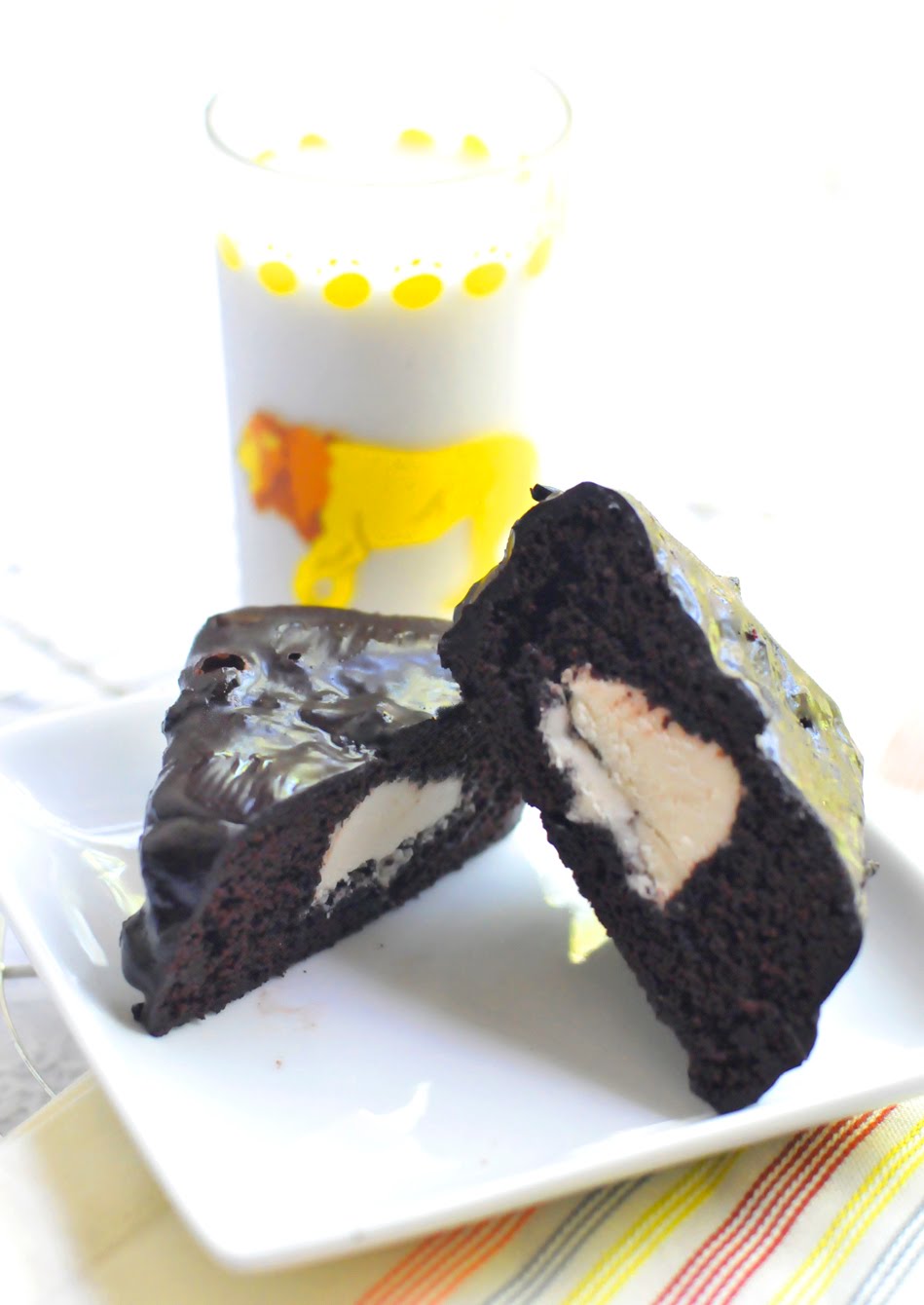 .  He went to a party a few weeks ago and was introduced to the little round cakester.  He is hooked.  I am a tad embarrassed to admit this, but I grew up on Ding Dongs, Ho-Ho’s, and Scooter Pies.  Those were my snack of choice. With that said, I would NEVER think of buying them for my kids.  Although I remember them being quite delicious, I just couldn’t bring them into my house.

I need a birthday cake for an upcoming celebration and after searching some books as well as my own personal library, I was not inspired.  I turned to Tastespotting and did a search for “ding dong”.  I found a few but the one that caught my eye was Smitten Kitten’s blog post dated February 26, 2008.  I went back and fourth as to whether I should do hers or do the recipe I used for Eli’s birthday cupcakes.  Because I had just made the cupcakes, I went for something new.  Plus, hers were cake specific and I didn’t have a lot of time to test and re-test. 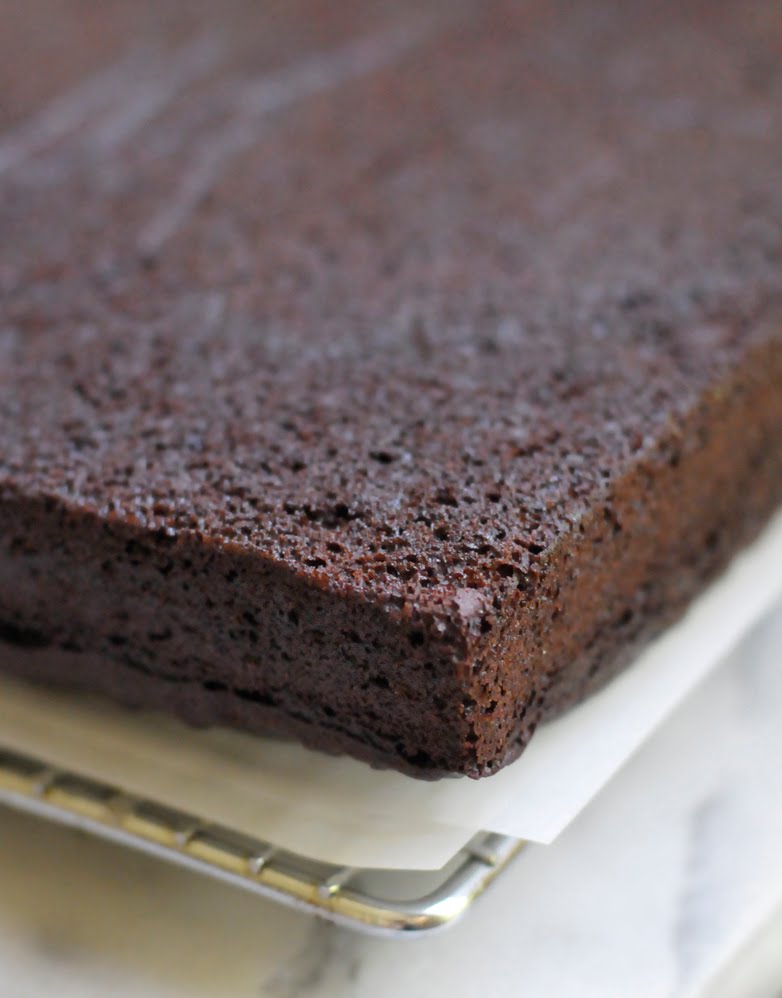 I made her cake in a large sheet pan.  I went back and forth as to whether I should cut out circles, thus what to do with the scraps or to just cut in 2 1/2″ squares.  You all know me, I can’t waste.  So, I went for the squares.  When the cake was removed from the pan, I loved the thickness.  It was almost the perfect “ding-dong” height.  However, when I cut them up, sliced them in half and filled them, they were uber-thick.  Almost too thick.  Regardless, continued on with the mission.  While the cake was cooling, I made the butter cream.  I love this butter cream.  It is, if I must say, perfect.  I also used the Lacquer Glaze from Rose’s Heavenly Cakes

.  I love Rose and love this book.


Next time, provided there is a next time, I will make them round.  I will also, try to pipe the butter cream into the center rather than cut them in half.  Don’t get me wrong, they were delicious, I was just hoping for them to better replicate the “original” !  I made them too big.  Big, small, whatever, everyone LOVED them…the were a huge hit.

• preheat oven to 300*, grease pans or cookie sheet (I used a large 10″ x 15″ cake pan ).  line bottom with parchment and grease again
• chop chocolate + combine with hot coffee, let mixture stand, stir after 2 minutes and keep stirring until the mixture is smooth.
• sift sugar, flour, cocoa powder, baking soda, baking powder, & salt.  in the bowl of an electric mixer, beat eggs until thickened.  slowly add oil, buttermilk, vanilla, + melted chocolate/coffee mixture.  add sugar/flour mixture and mix until just combined.
• pour batter into prepared pan.  bake until a toothpick inserted into the center comes out clean (about 50 minutes to 1 hour 10 minutes).
• cool completely to room temperature.  invert cake and peel off parchment.
• at this point, I cut the cake into 2 1/2″ x 2 1/2″ squares.  then i cut them through the center, creating two equal halves.  cut out a hole in the middle with a melon baller and then piped in some cream filling. put the top back on and then froze them on parchment lined cookie sheets.

Basic Butter Cream
4 oz. softened butter
4 cups sifted confection sugar
1 Tbls. vanilla
3 or more Tbl. milk (depending upon how thick you like it)
•mix to your desired thickness

• in a small bowl, place 1/4 cup cold water and sprinkle the gelatin over the top.  stir to moisten and allow to rest for 5 minutes.  cover tightly with plastic wrap to prevent evaporation.
• in small sauce pot, over medium heat, whisk sugar and 1/4 cup of water.  stir constantly until sugar dissolves.
• remove the pan from the heat and gently whisk in the corn syrup & cocoa until smooth.  the mixture should be glossy.  stir in the heavy cream with a silicone spatula.
• return the pan to medium heat and stirring constantly, bring the mixture to the boiling point (190*).  small bubbles will start to form.
• remove the pan from the heat and strain into a medium bowl.  cool to 122*-140*.  stir in the softened gelatin until dissolved.
• strain into a heatproof glass measuring cup.  cool, stirring gently.  the glaze coats best at 80*.  this glaze is best used right away.  this glaze is yummy.