I have been in the kitchen non stop since before Thanksgiving. Baking, creating, cooking, organizing, and eating. After baking thousands of cookies, bars, making candy, and teacakes, for holiday gifting, believe it or not, I ran out of stuff. I still had several on my list that I could not neglect, yet the idea of pulling out my kitchen aid mixer and turning on my oven was not sounding so attractive.

I could not bake one more thing. Instead of choosing one of our old favorites, I thumbed through my little, black composition book and found this recipe, earmarked. It required pantry staples, my Cuisinart, and a little bit of time (not much). Not only were these simple to make, but they look pretty, and they are quite delicious. I dipped a few in some sifted unsweetened cocoa and although they were yummy, I preferred those coated in almonds.

These were made specifically for my kids pediatrician, who is vegan. He doesn’t preach his philosophy, but he sure makes it sound good (his wife is a great cook). I have tried to bake a few vegan desserts, actually failed at making vegan desserts. A few weeks back I made a little coconut, oat, chocolate cluster, which were also vegan, I kind of fell in love. So when trying to make something vegan for friends, avoid the whole baking thing. Keep it simple and make something raw that doesn’t require either your mixer or the oven.

What I love most about the holidays, almost as much as creating the recipes and organizing the flavors, is the packaging and a new creative way to say “thank you”. It’s always a fun creative outlet for me. I do have my favorite on line stores along with their specialty boxes, colored wax paper, and ribbons(wrote about it here) and it’s easy to take the same box and accessories and give them a totally new look.

Enjoy the holidays, stay safe, and hold your loved ones close.

• put dates in the workbowl of the cuisinart. pulse until chunks no longer appear.
• add the rest of the ingredients and pulse until fully combined.
• place in a bowl and cover with plastic wrap. chill for 20 minutes.
• toast almonds in 325* oven for 10 minutes. let cool, then chop fine.
• using a 1″ ice cream scooper, roll date mixture into balls.
• roll in chopped almonds (pressing almonds into truffles) and place on a parchment lined baking sheet.
• place baking in fridge and let set for an hour. store in an airtight container for weeks.
* variation: roll truffles in sifted, unsweetened cocoa powder. 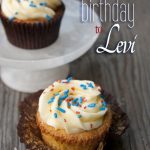 The Perfect Cupcake + A Birthday CelebrationSweets 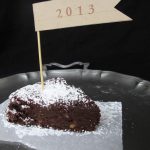