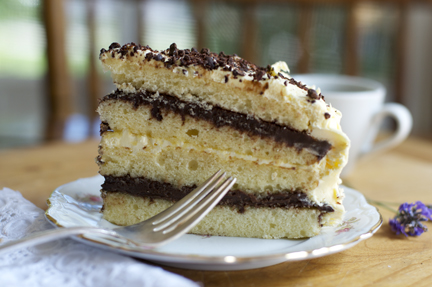 I don’t really make a lot of cakes.  I make loafs, I make coffee cakes, I make bundt cakes, and lots of other cakes.  However, I don’t make a lot of layer cakes.  I was requested to make a layer cake for a friend of a friends birthday.  If you know me, you know I have hard time saying NO.  So, I made a birthday cake.

cookbook and adore her recipes.  I really wanted to make one of her cakes but for some reason or another I stumbled upon Dorie’s Black and White Chocolate Cake.  Glad I did.

The recipient of the cake came up to me after his first bite and said that this was his favorite kind of birthday cake and how did I know.  I wanted to tell him I was psychic and that I know all things flour, sugar, and butter.  But it was his 85th!  I didn’t want him to go into shock.  Instead, I just nodded and wished him a very, very happy birthday!!

• preheat the oven to 350*.  butter 2 9″ x 2″ round cake pans, dust them with flour and line the bottom of the pans with parchment.  set aside
for the cake
• sift the cake flour, baking powder, baking soda and salt
• in a standing mixer, beat the butter on medium speed until soft and creamy.  add the sugar.  add the eggs, one at a time, and then the yolk, beating for 1 minute after each addition.  beat in the vanilla, the mixture will look curdled. reduce the mixer to low speed and add the dry ingredients alternately with the buttermilk, beginning and ending with the flour.  scrape down the side of the bowl and mix one more time.
• divide the batter between the two pans and smooth the tops with a spatula.
• bake for 28-30 minutes, rotating the pans at the midway point.
• when done, transfer to a wire rack to cool to room temperature.
for the chocolate cream
• bring milk to a boil
• in a heavy-bottomed saucepan, whisk the egg yolks with the sugar, cornstarch and the salt until thick and well blended.
• whisking, drizzle in about 1/4 cup of the hot milk- this will temper, or warm the yolks so they don’t curdle. still whisking, add the remaining  milk in a steady stream.  put the pan over medium heat and whisking vigorously, constantly and thoroughly, bring the mixture to a boil.  keep whisking for 1-2 minutes.  remove from the heat.
• whisk in the melted chocolate, and let stand for 5 minutes.  whisk in the pieces of butter, until fully incorporated and smooth.  press a piece of plastic wrap against the surface of the cream.  refrigerate  until chilled.  can be made 3 days in advance.
white chocolate whipped cream
• put the white chocolate in a glass bowl set over a pan of simmering water. meanwhile bring 1/3 cup of the heavy cream to a boil.  when melted, remove bowl from the pan. pour the heavy cream over the melted chocolate.  mix until smooth.  let it sit on the counter until it reaches room temperature.
• working with a standing mixer, whisk the remaining 1 cup of cream, until it reaches the softest peaks.
• turn the machine to high and add the cooled white chocolate and beat it until it reaches firm peaks.  put a piece of plastic wrap over it and put in the fridge for 2 – 6 hours.
assembly
• using a long serrated knife and a gentle sawing motion to even them.  slice each layer horizontally in half.  place one layer cut side down on a cardboard cake round.
• remove the dark and white chocolate creams from the fridge and whisk each of them vigorously to loosen and smooth them.  on one layer, spread some chocolate (about 1 cup) over the cake layer.  put a cake layer on top of that.  cover second layer with white chocolate whipped cream.  repeat  with the remaining layers.
• frost the exterior of the cake with the white chocolate whipped cream
• decorate the top with the crushed chocolate covered cocoa nibs
• chill for at least 3 hours or overnight. 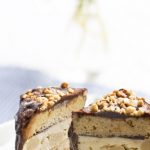 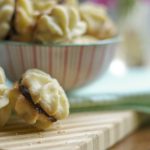 Not Your Typical Bakery Style CookieSweets